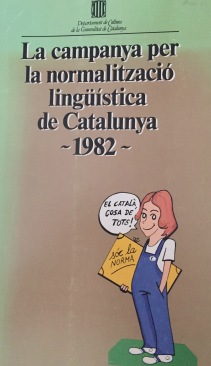 ervisor meeting this week, my supervisor gave me a copy of an document (almost in the form of an annual) promoting “La Campanya per la normalitzación lingüística de Catalunya – 1982-“.

The front of the book has the character of ‘Norma’ who was used as the friendly face of language normalisation in Catalonia in the 1980s.
I felt that I just had to share this image with those who have an awareness of language normalisation in Catalonia but have never handled authentic documents published at the time to disseminate information to the masses.

The character of Norma and her image speak a thousand words about the approach that Catalonia took to linguistic normalisation.

I am hoping that as a result of seeing this document that I can begin to collate a collection of authentic documents from the time on this website to document the primary evidence of sociolinguistic standardisation and change in both regions.